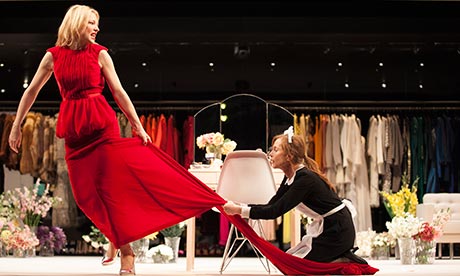 I love theatre. I love the big gestures and big emotions - it's life amplified.

This performance has been anticipated as the highlight of the year for Sydney's theatre lovers: Cate Blanchett, French actress Isabelle Huppert and the young prodigy Elisabeth Debicki together on stage to play The Maids in an Australian adaptation of Jean Genet's classic written in 1947.

The play is loosely based on real events, where two maids and sisters murdered their employer. It is a sexually charged piece that explores the complex relationship of the three women. Solange (Huppert) and Claire (Blanchett) are subversive characters who have nothing. When their mistress (Debicki) is out, the two engage in an elaborate roleplay, one assuming the part of the mistress, the other one of the maid. They hate and depend on their mistress in equal measures, playing out sexual fantasies, but also a secret desire to kill the decandent oppressor.

Elisabeth Debicki is only 22 years old and working with two of her professional idols. She carries her role of the mistress with confidence and charisma. She is very tall, towering over the two other women, with the gangly, loose limbs of a dancer.

Blanchett's voice is remarkable (I've noticed this for the first time when she played Galadriel in The Lord of the Rings): sometimes booming and frightening, sometimes chilling and clipped, sometimes shrill, sometimes girlish. The same goes for her appearance: She can be plain and almost plump looking in one moment and of luminous, shimmering beauty in the next.

Huppert is like a naughty child - surprisingly small and slight, with the lithe body of a teenager. She is constantly moving, swinging from the clothes rack, frolicking in the big bed with her legs in the air, gesticulating and sticking her tongue out. She is hard to understand with her very strong French accent, but what courage of her to expose herself like that!

Part of the stage set-up are cameras taking details of the performance and projecting them on a big screen above the stage.

The cameras capture unexpected angles that are sometimes grotesque, sometimes painfully intimate, sometimes strangely random, like the shot of the yellow rubber gloves or one single shoe. At the same time this gives a sense of unease and building tension, the foreboding that a catastrophe could happen at any moment, from any corner.

The actresses are brave enough to let the audience see unflattering angles, sweat and faces that are no longer as taut as that of young Debicki. But they are still beautiful and at moments strangely innocent looking, yet so bitter, polluted and twisted in their murderous hate.

Huppert and Blanchett are incredibly courageous performers. They look exhausted and drained at the end, having hated, yelled, plotted and flirted for two hours straight.

I'm virtually on the edge of my seat for the whole time and find myself audibly exhaling at the end, being relieved for this emotional roller-coaster to end. And isn't this what art is all about? To suck you in, shake you up and spit you out at the end, dizzy from the experience.
Posted by Svetlana Stankovic at 20:28 No comments: