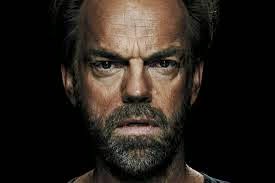 Macbeth is one of Shakespeare's most iconic plays about the nature of evil and the destructive human thirst for power.

Kip Williams, the director, is not a big name (yet). He decides on a drastic re-working of the stage setting: We, the audience, sit on the stage, while the action plays around a bare table, mismatched chairs and very few other props in front of the auditorium emptily looming behind. The actors (all of them except Hugo Weaving playing more than one role) are sometimes sitting up in random seats, sometimes standing right in front of us. This is a thrilling and raw experience. I could reach out my hand and touch them, I  hear their breath and see their spittle and sweat flying.

Hugo Weavering plays Macbeth. No, he doesn't play him, he is Macbeth. He whispers, he cries, he shouts and sobs, and he takes you right along on his intense emotional journey. He is absolutely mesmerising and domineers the stage. Next to his towering performance some of the younger actors seem slightly pale in comparison. Only John Gaden can measure up, playing first Duncan and later Macduff's young child. He is formidable as both.

Above all I'm struck by the physicality and almost athletic nature of theatre. I quite forgot this after mainly watching movies recently, where every experience is edited and airbrushed. Sitting on this (very uncomfortable) chair for two hours straight, there is no distancing myself, no escaping. I'm sucked in, I'm there - in that Scottish castle and on that battlefield in a snow storm, and I'm watching Macbeth die right in front of me. It's chilling and it's beautiful, and I am hooked. Watch this space for more stories from the theatrical frontline. 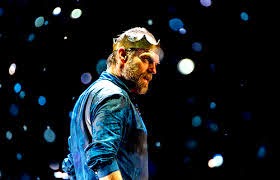 Posted by Svetlana Stankovic at 21:20 No comments: